So if you have read my previous post on my meals on the flight to Hong Kong, you will know that the first flight’s meal was appalling!

Leaving out of a Hong Kong, I was somewhat sceptical. For a start, we didn’t get off in a positive frame of mind as there was a “technical issue” with the aircraft and after some farting about for around 3 hours they offloaded us.

More dithering at the airport on a go/no go and they chucked us all in to a hotel for the night.  So instead of leaving Hong Kong at 8pm, we finally got to bed in a hotel at 4.15am.

So 24 hours after we should have left Hong Kong, we finally get airborne…

The first leg from Hong Kong to Sydney I was served two meals. They were both Indian vegetarian as I’d requested. They were ok – nothing special, edible… (photos at the end of this post – sorry about the quality, the lighting was dim).

The problem with the meal this time came with our second flight from Sydney to Christchurch. Now I know that this was a change of flight and we were in fact travelling 24 hours later than expected BUT I had an email confirmation before leaving Hong Kong that Qantas had rebooked us (as confirmed) onto the Sydney-Christchurch flight that we caught.

No special meal. Would I like chicken or beef? Ummmm – no thank you. So the flight attendant came back with a seafood meal – no thanks again.

She apologised – it wasn’t her fault, and I wasn’t grumpy with her. Luckily I had stashed snacks in my hand luggage.

A few minutes later another flight attendant arrived with a tray with some fresh whole fruit – apple & pear, some crackers, a bread roll and a small green salad with vinaigrette. I have no idea where they conjured it up from but it wasn’t a standard meal set.

I can’t see any reason why my meal request was “lost”. If we had turned up and caught a random flight that would be explainable but they knew we were coming on this flight and had rebooked us so the meal request should have stuck.

This isn’t the first time we have had major issues with them. The previous flight I booked a few years ago, they changed the timetable completely and had us rebooked on flights that would have taken an extra 8 hours to get to our destination. Not to mention, with the updated itinerary we received, it had us catching a connecting flight that left before we arrived to catch it.

We cancelled and got a full refund that time, but we’d booked cheap fares and were exceptionally lucky that Air New Zealand had seats still available for much the same price and a much more direct route.

I vowed then never to go Qantas, but when looking at the flights for this trip to Hong Kong it was about $200 less to go with Qantas than Air New Zealand. I thought ok, why not, and this is why… 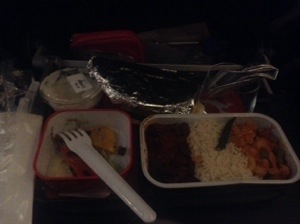 One thought on “Qantas meals – round two… vegetarian or… ?”