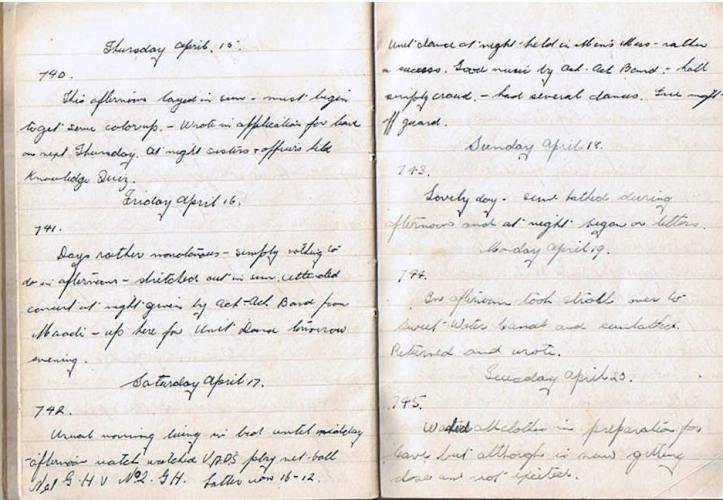 This afternoon layed in sun – must begin to get some colour up.  Wrote in application for leave on next Thursday.  At night sisters & officiers held knowledge quiz.

Days rather monotonous – simply nothing to do in afternoons – stretched out in sun.  Attended concert at night given by Ack-Ack band from Maadi – up here for unit dance tomorrow evening.

Usual morning being in bed until midday – afternoon match watched V.A.D.S play netball.  No1 GH vs No2 GH.  Later won 16-12.

Lovely day – sunbathed during afternoon and at night began on letters.

In afternoon took stroll over to Sweet Water Canal and sunbathed.  Returned and wrote.

Washed all clothes in preparation for leave but although is now getting close am not excited.

Join 1,759 other subscribers
An insta filter is the closest I am going to get to a winged eyeliner look.
You know you live in Australia when this is the sign at the train station
Lovely bronze kangaroo - pity about the nipples… and the terrible photo
Spectacular view from the Blue Mountains - I would share more photos but they all look the same.
Very excited to see this show.
There are no words to describe how much I ❤️ my new Electra E-bike.
“Work from anywhere” has its perks. Breakfast from @guzmanygomez this morning alongside the #brisbane river near #southbankparklands
Went for a run before work yesterday morning. Came home with a 10 person tent which a neighbour left outside with a “free” sign. That was a long .5km carrying that sucker home. Delighted it is complete and in pretty good condition. So that sorts out accommodation next time my nephews are here.