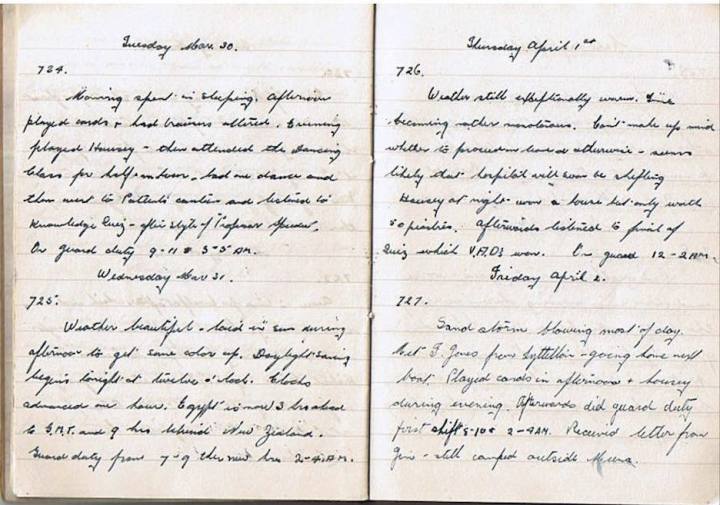 Morning spent in sleeping.  Afternoon played cards & had trousers altered.  Evening played Housey – then attended the Dancing class for half an hour – had one dance and then went to patients canteen and listened to Knowledge Quiz – after style of “Professor ???”.  On guard duty 9-11 & 3-5AM.

Weather beautiful – laid in sun during afternoon to get some colour up.  Daylight savings begins tonight at twelve o’clock.  Clocks advanced one hour.  Egypt is now 3 hours ahead of GMT and 9 hours behind New Zealand.  Guard duty from 7-9 then new hours 2-4AM.

Weather still exceptionally warm.  Time becoming rather monotonous.  Can’t make up mind whether to proceed on leave or otherwise – seems hospital will soon be shifting.  Housey at night – won a house but was only worth 50 piastres.  Afterwards listened to final of Quiz which VAD’s won.  On guard 12-2AM.

*Jim Wootton was his girlfriend Marg’s brother and would become his brother-in-law after the war.