Another place we dined while at Walt Disney World in Florida was Cici’s Pizza. There are a number of these scattered around the area and we went to one in Kissimmee on 192.

At this particular location, the cashier was one of the most miserable looking bastards I have ever seen.  He really needs to get a new job if he hates dealing with customers so much.  Not a good first impression.

On to the buffet, drinks are your usual soft drinks plus iced tea.  You can ask for a cup of water for free.

They have a small salad bar, nothing very exciting – lettuce leaves plus a selection of cut vegetables, a pasta salad and a small selection of dressings.

There is hot pasta – spirals and a choice of two pasta sauces – alfredo of marinara.  There was one soup – Chicken Cavatappi (spiral pasta, the same as for the salad).  Mum said the soup was good.  The pasta and sauce was fine, nothing to get too excited about.

Then the main course – pizza!  There was a wide selection of which at least 3 were vegetarian – Margarita, Vegetable and Spinach Alfredo.  For the meat-eaters – the BBQ Pork and the Buffalo chicken proved to be very popular with our group.

There were also Pepperoni, Sausage and a handful of other ones also.

No choices that I saw for those that are gluten-free and vegan’s would likely not find much to eat either.

For dessert they had Apple Bavarian pizza – our group had mixed feelings on this.  “Yum” said some, others said “too sweet!”  The hot cinnamon rolls got a thumbs up all round. 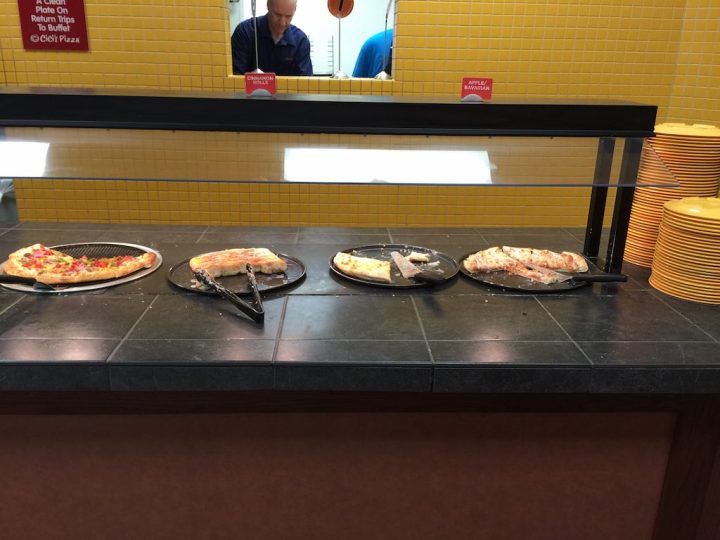 Our final verdict, it was ok.  Sweet Tomatoes rated higher with our group, but as its nearly twice the price, if you are on a really tight budget, Cici’s Pizza might be a better choice for you.

3 thoughts on “On the hunt for decent food – Cici’s Pizza – Kissimmee, Florida”

My Tweets
After having breakfast @cardamompodbrickworks this morning I will in future require all my drinks to be decorated, my avo shaped like a flower and all my fruit cut into shapes. So pretty and so delicious. It proves that restaurants that have crappy, tasteless and boring #vegetarian options are just not making any effort.
I remember back in the “good ol’ days” that people used to visit the International Airport terminal
Two of the three Sugar Gliders we saw last night.
Gorgeous Nocturnal Striped Possum - this was the second of the two we saw last night. This one happy to share the feed with the Sugar Gliders. The first one chased off the gliders and other small native animal at the base of the tree.
We wanted to see a Cassowary in the wild. We have seen this one patrolling the camp ground most of today. Stealing food from campers and being followed by the paparazzi.
Cassowary casually strolling around the camp ground and passing the door of our cabin
Mission Beach definitely the place to see the endangered Cassowary.
Beware of falling coconuts - because in #Australia if the wildlife doesn’t kill you, the plants will.
Totally candid, unposed photo of me relaxing - on a palm tree … as you do.