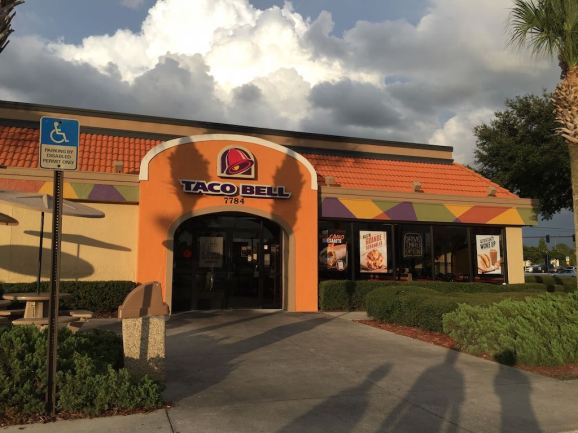 There are two things I miss as a vegetarian, one is having a choice on a regular restaurant menu “the vegetarian option”…  its not an option if there is only one thing to pick.  The second is being able to get fast food.  While I like to eat healthily most of the time, some days I just want something quick and easy!

The majority of the burger chains don’t have a vegetarian burger.  Leaving out the meat IMO is not a solution.  There are dozens of different vegetarian patty options available in the supermarket, and any one of them could be substituted in practically all of the chain burger meals.

But in the US, for vegetarians and vegans, there is Taco Bell!  Now I am not saying this is “good” Mexican food.  I’m not sure I’d know what that was anyway, as it’s a cuisine we have little of in New Zealand, but its quick, cheap and they have vegetarian options.

Looking at the menu, you might not initially see them, but start with the bean and cheese burrito.  At the Taco Bell we went to last night, this was on their $US1 menu.  The other vegetarian item with no changes is the seven layer burrito.  Note though that the sour cream according to their website does contain “a small amount of gelatin“.

I had also read that they will happily substitute the meat for beans, so last night I ordered the Fiesta Taco Salad with beans instead of meat.  “No problem” they said!    Beans, rice, cheddar cheese, lettuce, tomatoes, red tortilla strips and sour cream with a container of salsa.  It was very tasty and I’d order it again.  It was less than $US6 including tax.

For vegans, you’d have to check but I think there are likely many items on the menu they would make without the dairy products.

So Taco Bell is looking like a more appealing option and I just read Burger King in the US has a veggie burger.  Might need to try that too… 😉 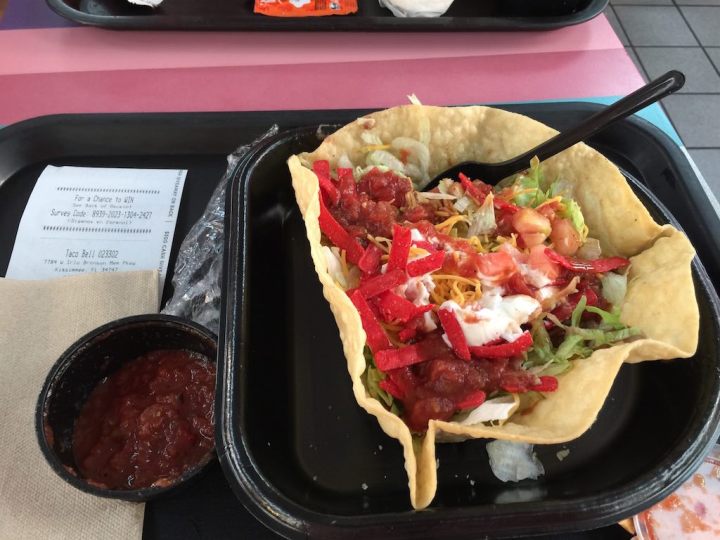 8 thoughts on “On the hunt for decent food – Taco Bell – Kissimmee, Florida”

Leave a Reply to The Daily Blabber Cancel reply

My Tweets
And for a change Indian for dinner with a mango lassi #indianfood #mangolassi #food #drink
Feed the birds, tuppence a bag #marypoppins @storybankmaryborough
Street of books at the Story Bank Museum - birthplace of P L Travers, author of Mary Poppins
It’s nice to have a productive weekend. Even better if you manage to stay within the lines. #adultcolouring #crabs #oceanoasis @harmonyofcolour
Heading back from the #athertontablelands a #rainbow after a heavy #rain shower #queensland #australia
Another #endangeredspecies sighting with Lumholtz's Tree-kangaroo @nerada_tea estate #athertontablelands #queensland #australia
#Cassowary in the wild in the #daintreerainforest - such an incredible experience to see this #endangeredspecies in its natural habitat #queensland #australia
#socialdistancing on the #kurandarailway #cairns #australia
After the crazy build up to #Christmas it was nice to find some peace and quiet this morning #Cairns #Australia