Visiting the Tate Modern in London was the most boring 15 minutes of my life.  Ok, so maybe I was there a little longer than that, but I found nothing there that appealed to me in any sense whatsoever.  But I confess, I have never been a fan of art galleries anyway.

Museums I love.  I can spend hours looking at the intricate details in old paintings in stately homes and castles.  I marvel at ancient pottery and mosaics.  I adore Roman and Eyptian statues.

However modern art, I tend to consider is created by people who cannot draw, paint or sculpt.  What my dogs do on the lawn each day is more creative.

Admission luckily was free, else I sincerely doubt I would have ventured past the public toilets in the foyer.

It was a hot December Sunday, so bustling with families.  Children clearly having a good time were around… what trickery is this?

And shortly thereafter as we ventured through the galleries, I was sucked into a world of magical, incredible and amazing works of art.

Well played QAGOMA, you got me.  I am now a fan after exploring the items within the walls.  I look forward to returning and once again be amazed at the incredible talent of some of these artists.  Many could clearly paint, draw and sculpt – with the odd exception of course.  😉

And really, who could not fail to be impressed with a seal balancing a piano?

I was drawn to this delicate necklace and the pretty shadow it created on the wall.  Up close, you can see its made from the little plastic sushi fish that previously contained soya sauce.   Created by artist Niki Hastings-McFall from New Zealand and entitled Too much Sushi II from her Urban Lei series.

Next up that caught my eye was the Ikea furniture with a skeleton dinosaur.  Speaking of our wastefulness with buying cheaper furniture and discarding it on the curb a few years later.  This seems at odds with the ancient remains of a creature that once ruled the earth.

Looking out over the Brisbane river, and towards the city a short distance away, was an area where visitors could engage and contribute towards creating a collaborative art piece of white lego block buildings.  Moving and changing daily as new buildings were created and others demolished – much like a real city does. 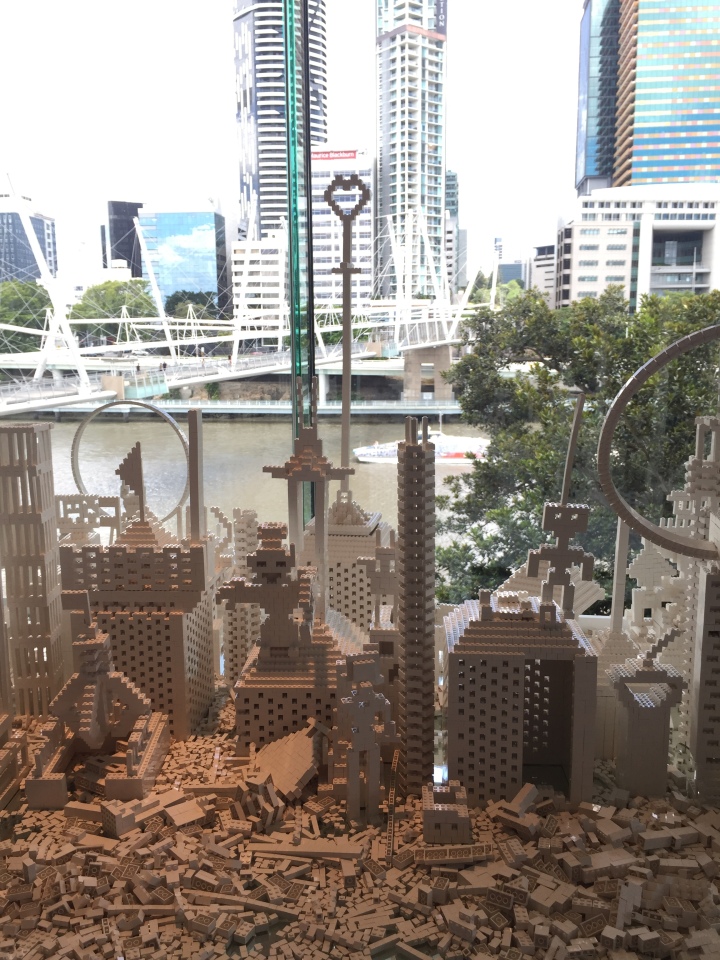 Fiona Hall’s creatively woven birds nests shown below were quitely subdued compared to some other displays and required a moment to inspect.  She has modeled 86 different birds nests with great detail – out of US currency.  An expensive art work for its materials alone.  This display is entitled “Tender” speaking to the birds and raising of their young with care, and of course the monetary meaning.

I don’t recall the details about these pony costumes but they were a selfie takers delight!  There were about 30 of them and you could wander between them and take photos of or with your favourites – this was a popular exhibit, bright and colourful.  I was amazed at the embroidery on the pony head wear.

This next sculpture of the deer was one of my favourite pieces – it sure was hard to get a halfway decent photo as the light in this particular room was dazzling.  It was also hard to photograph with all the people so I had to wait until the room cleared out a bit.

These upcycled, if that is the word for it, paper bags were incredible with their little cutout worlds inside.  Hard to photograph through the glass though. 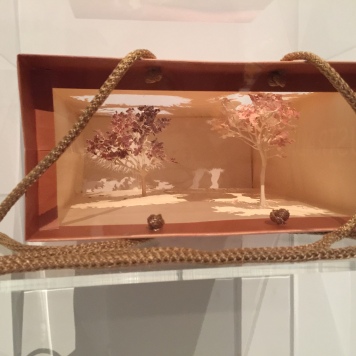 Its hard not to like somewhere that is so interactive, and below you can clearly see I’m enjoying myself engaging in this particular exhibit. 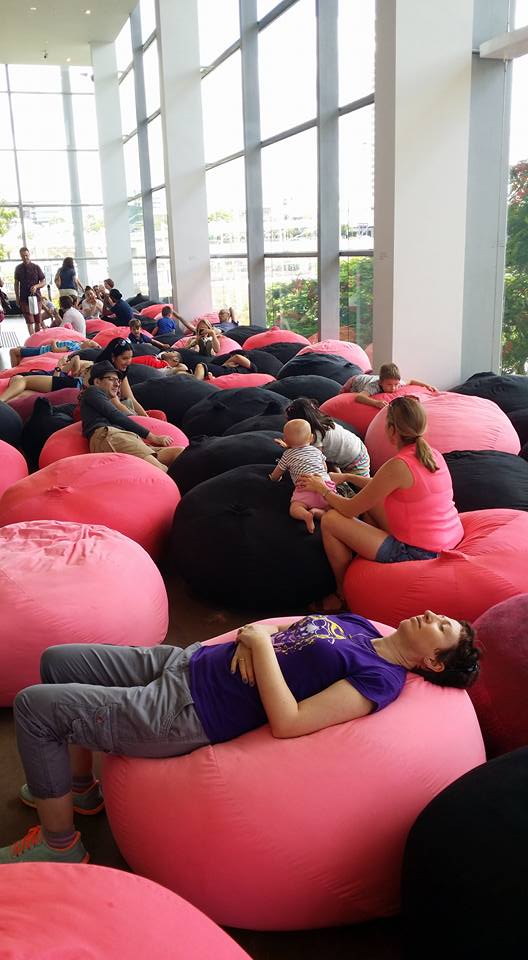 The current exhibits are on until April and are celebrating QAGOMA’s 10th birthday.  We will definitely be sure to visit again sometime to enjoy some more art.

My Tweets
Trying to get some #exercise this morning but I found these #pool side spectators very distracting #australia #goldcoast #kangaroos
And for a change Indian for dinner with a mango lassi #indianfood #mangolassi #food #drink
Feed the birds, tuppence a bag #marypoppins @storybankmaryborough
Street of books at the Story Bank Museum - birthplace of P L Travers, author of Mary Poppins
It’s nice to have a productive weekend. Even better if you manage to stay within the lines. #adultcolouring #crabs #oceanoasis @harmonyofcolour
Heading back from the #athertontablelands a #rainbow after a heavy #rain shower #queensland #australia
Another #endangeredspecies sighting with Lumholtz's Tree-kangaroo @nerada_tea estate #athertontablelands #queensland #australia
#Cassowary in the wild in the #daintreerainforest - such an incredible experience to see this #endangeredspecies in its natural habitat #queensland #australia
#socialdistancing on the #kurandarailway #cairns #australia