Its often been said that a sense of humour lasts a lifetime.   Recently(ish) my Mum unearthed this little gem of a handmade card that I created for her 45th birthday.  I would have been about 15 at the time.

On the front of the card it reads

At the time, not only did I know its good to suck up, but note the finely used sarcasm of the word “Mummy“. 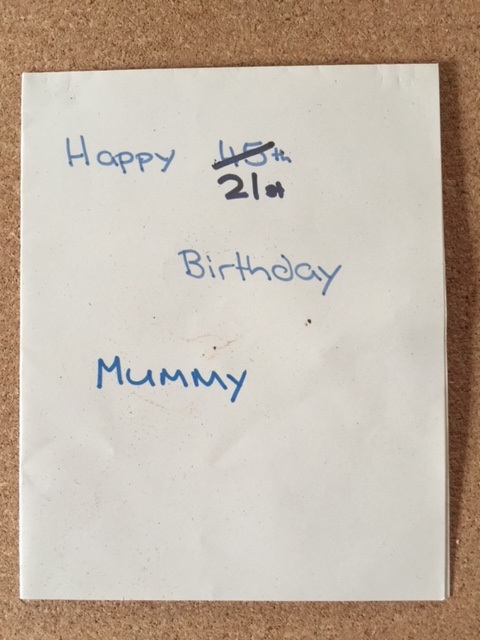 Inside the card is a short poem, on the left reads –

Of all the other

I think you are the

Even if you wear my

Now this is clearly why I never write poetry. This also highlights how little money we had growing up.  Mum wore my cast off old petticoat from under my school uniform to keep warm in winter.

On the right hand side it reads –

I was going to write a really good poem but I wrote this instead so it wouldn’t out do yours.

P.S. I was going to stick dead butterflies on the front but I changed my mind.

Mum used to often write what would be considered slightly rude poems while we were at school.  Just to amuse herself while doing chores around home.  The peak season was Christmas where Santa was often the topic of her poetic wrath.  We’d often come home to read through her “work” from the day and giggle over them.

“The girls” were my pet rats at the time of writing the card.

As for the dead butterflies…

Well flip over to the back of the card…

I stuck them on the back instead.

Let me assure you, the butterflies were already deceased through natural causes long before I repurposed their corpses.  I remember laughing over the dead butterflies on the back .  I also remember the shrieks of laughter from friends and the “ewwwww” reaction.

A treasure from my teenage years…

This is also why I don’t work for Hallmark 😉

My Tweets
And for a change Indian for dinner with a mango lassi #indianfood #mangolassi #food #drink
Feed the birds, tuppence a bag #marypoppins @storybankmaryborough
Street of books at the Story Bank Museum - birthplace of P L Travers, author of Mary Poppins
It’s nice to have a productive weekend. Even better if you manage to stay within the lines. #adultcolouring #crabs #oceanoasis @harmonyofcolour
Heading back from the #athertontablelands a #rainbow after a heavy #rain shower #queensland #australia
Another #endangeredspecies sighting with Lumholtz's Tree-kangaroo @nerada_tea estate #athertontablelands #queensland #australia
#Cassowary in the wild in the #daintreerainforest - such an incredible experience to see this #endangeredspecies in its natural habitat #queensland #australia
#socialdistancing on the #kurandarailway #cairns #australia
After the crazy build up to #Christmas it was nice to find some peace and quiet this morning #Cairns #Australia