I confess the first entry in this post was technically lunch last week, so sue me.

In the Merdian mall there are at least 4 places to get Japanese style food, 3 sushi places and in the big foodcourt you will find Hikari Sushi.  They have a selection of sushi in a cabinet so you can mix and match as well as a cooked to order menu.  For $9.90 I ordered the Teriyaki Tofu Don (which includes  Miso soup), I admit, I didn’t really have high hopes.  Wow was I surprised!

I ordered, was given a electronic buzzer and went and found a table to wait.  It was a busy Friday lunchtime and the foodcourt was pretty busy.  I was starting to think after 15 minutes they had forgotten me, then the buzzer went off.

I was handed my tray – it was a nice one too, not the usual plastic foodcourt ones, proper china plate and everything – v. posh.  The only thing I didn’t like about the tray was the polystyrene type cup for the soup and the wooden chopsticks.  A mug and plastic chopsticks or a fork would have up’ed this to restaurant quality.

The tofu was soft and creamy, while the teriyaki was sticky and caramelized.  The salad was simple, mesclun leaves, red onion and a few corn kernels in a Asian style light (soy?) dressing.  This was a perfect accompaniment to the rice.

I give this a 4.5/5 – .5 off for the wooden chopsticks and polystyrene cup.  Oh and the miso could have done with being a fraction warmer. 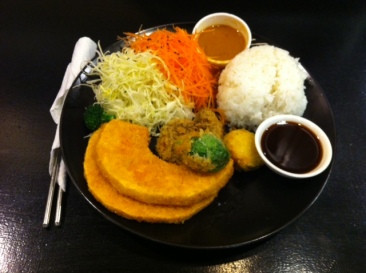 Lunch Monday found me outside Jizo Cafe & Bar. This place is always busy at both lunch and dinner times.  I decided to give it a try.  They have a blackboard menu and this appears to be a subset of a larger menu.

I chose the Vegetable Katsu for $11.50.  I wasn’t really sure what to expect – the menu said “Crumbed vegetables, Salad & Rice”.  I was thinking more like a vegetable patty but it was actually individually crumbed vegetable pieces – brussel sprout, mushroom and pumpkin.  The salad was very finely shredded cabbage and carrot with a small sprig of broccoli.  The dressing was served on the side and was a sesame style dressing very similar to the one I had a couple of times in Tokyo.

I am giving this a 5/5 – it was fresh and tasty.  I liked having the teriyaki sauce and sesame dressings on the side.  The vegetables were cooked well, not mushy and not to firm and they were piping hot.

I would definitely go back.

Could I actually be more of a fan of Japanese food than I thought?

Tuesday for lunch I walked to Tokyo Garden as I’d seen a sign in their window advertising $10 Bento boxes for lunch. They had maybe 10 options including a Vegetarian Bento.

I ordered at the counter and took a seat, I was the only customer to start with but then a few more people started to come in.  I typically like bento boxes as I like the variety found in them. This one had a salad (top left), hot stirfry veges, steamed rice, tofu cube, two spring rolls and a couple of piece of pumpkin tempura and in the middle was some sweet chilli sauce.

Again the wooden chopsticks – I hate these!

Not bad value for lunch at only $10 but I after the last two meals being pretty amazing, I only give this a 3.5/5.  I couldn’t fault it but I have had much better bento boxes elsewhere.

I also note that this place doesn’t have great reviews elsewhere so probably its more of a lunch than dinner place.  Though I do note they have a Teppanyaki grill so if that’s your thing, it might be worth a try?

I think I must have hit the high spots early in this series and Wednesday’s lunch was decidedly underwhelming from Savoury Japan in the Meridian Mall.

$7.50 for a Mixed Vegetarian box – Inari, seaweed salad and four pieces of vegetarian sushi roll – red capsicum, avocado and cucumber.  I had high hopes but the rice was very tasteless and a bit mushy.  I wouldn’t get it again.

3/5 – not much more to say really other than make your way downstairs to Hikari Sushi instead.

Friday lunch, I found Savoury Japan also have a restaurant on Princes Street in Dunedin.  So being brave, I decided as it looked pretty busy that I’d risk it.  I wasn’t hopeful after the lunch on Wednesday being disappointing, but I figured if I avoided the sushi and went off the cooked menu I might have a better experience.

They had a number of vegetarian (and probably vegan) items.  I choose the Satay Vegetables.  Not a dish I usually associate with Japanese cuisine.  I grabbed a table and waited for my meal.  It took maybe 5 minutes to arrive and it was piping hot – fresh out the kitchen. I actually had to wait a couple of minutes for it to cool before starting.

The vegetables were cooked well, towards the softer side, and the satay was mild and not overwhelming – not too sweet and not spicy.  It allowed the taste of the vegetables to come through.  It also was only lightly coating the vegetables.

I thought this was good value for $9 – it was a huge serving and I couldn’t finish all the rice.

I give it 4/5.  I would go back and try some of the other items on their menu which was extensive and offered a number of vegetarian dishes.  They also had a cabinet with various sushi rolls which you could dine in or takeaway with.

So next week, what’s on the menu?  I think I might mix it up a bit and try a number of different ethnic cuisines… watch this space!