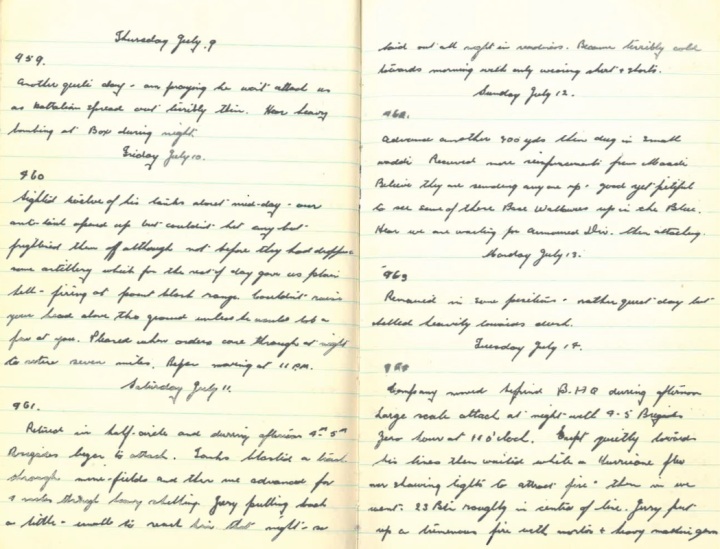 Another quiet day – am praying he won’t attack us as battalion spread out terribly thin.  Hear heavy bombing at box at night.

Sighted twelve of his tanks about mid-day – our anti-tank opened up but couldn’t hit any but frightened them off although not before they had opened up some artillery which for the rest of the day gave us plain hell – firing at point-blank range.  Couldn’t raise your head above the ground unless he would lob a few at you.  Pleased when orders came through at night to retire seven miles.  Began moving out at 11PM.

Returned in half-circle and during afternoon 4PM-5PM brigades began to attack.  Tanks blasted a track through minefields and then we advanced for 4 miles through heavy shelling.  Jerry pulling back a little – unable to reach him that night – so laid out all night in readiness.  Became terribly cold towards morning with only wearing shirt & shorts.

Advanced another 400 yards then dug in small wadi.  Received more reinforcements from Maadi.  Believe they are sending any one up – good yet pitiful to see some of their base wallowers up in the blue.  Hear we are waiting for armoured div(ision) then attacking.

Remained in same positions. Rather quiet day but shelled heavily towards dusk.

Company moved behind BHQ during afternoon.  Large scale attack at night with 4-5 brigades.  Zero hour at 11 o’clock.  Crept quietly towards his lines then waited while a Hurricane flew over showing lights to attack fire then in we went.  23 Battalion roughly in centre of line.  Jerry put up a tremendous fire with mortar & heavy machine gun…

The following extract from World War 2 Timelines website in order to put the above into perspective.