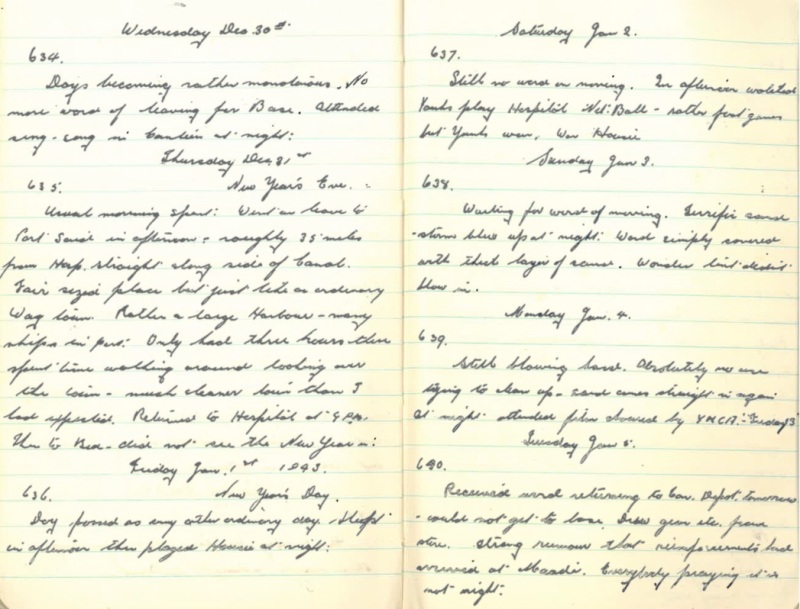 Note – this entry contains a racial slur that may cause offence.

Days becoming monotonous.  No more word of leaving for Base.  Attended sing-song in canteen at night.

Usual morning spent.  Went on leave to Port Said in afternoon – roughly 35 miles from Hosp.  Straight along side of canal.  Fair sized place but just like an ordinary wog town.  Rather a large harbour – many ships in port.  Only had three hours there.  Spent time walking around looking over the town – much cleaner town that I had expected.  Returned to hospital at 9PM. Then to bed – did not see the New Year in.

Day passed as any other ordinary day.  Slept in afternoon then played Housie at night.

Still blowing hard.  Absolutely no use trying to clean up – sand comes straight in again.  At night attended film showed by YMCA – Friday 13.

Received word returning to Con. Depot tomorrow – could not get to base.  Drew gear etc. from store.  Strong rumour that reinforcements had arrived at Maadi.  Everybody praying it is not right.

My Tweets
Today’s escape from humanity was to Tambourine National Park. The huge buttress roots on this tree had an entire forest growing on it.
Today’s escape from the suburbs - 20 minutes from home at the hidden gem of the Clagiraba Creek trail #goldcoast #queensland #australia @destinationgoldcoast
As the old song goes -
This holiday sponsored by beans, lentils and pulses. Open flames banned for obvious reason. #travel #food #vegetarian
Mt Kiangarow at Bunya National Park with no human sounds - no traffic noise or people - bliss! #queensland #australia #travel
Visiting the European Masterpieces from The Metropolitan Museum of Art New York @qagoma and thinks this artist might have needed remedial lessons on painting faces
Fantastic views from the @skypoint_au observation deck #goldcoast #australia
If we can’t travel at least we can see the wonders of the world in #lego #brickmanqm
Jar Jar Binks and the droids in the detail on the Arc de Triomphe in #lego #brickmanqm