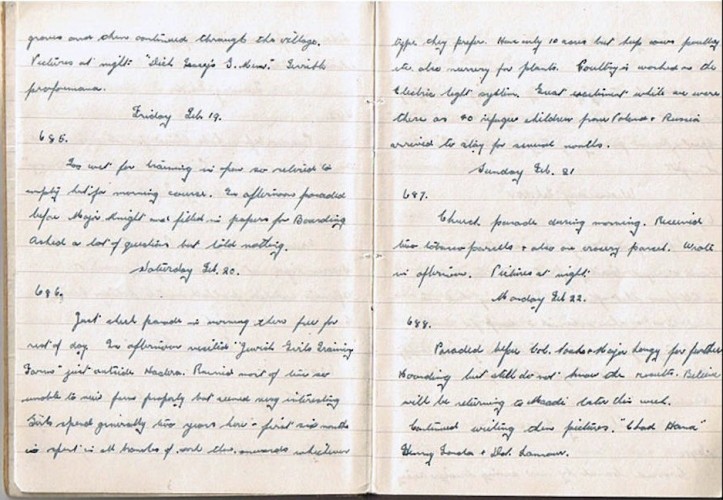 … groves and then continued through the village.  Pictures at night “Dick Tracy’s  G-Men”.  Terrible performance.

Too wet for training in open so retired to empty hut for morning course.  In afternoon paraded before Major Knight and filled in papers for boarding.  Asked a lot of questions but told nothing.

Just check parade in morning then free for rest of day.  In afternoon visited “Jewish Girls Training Farm” just outside Hasdera.  Rained most of time so unable to view farm properly but seemed very interesting.  Girls spend generally two years here – first six months is spent in all kinds of work then onwards whichever type they prefer.  Have only 10 acres but keep cows, poultry etc.  Also nursery for plants.  Poultry is worked on the Electric Light system.  Great entertainment while we were there as 40 refugee children from Poland and Russia arrived to stay for several months.

Paraded before Col. Noah(?) & Major Longy for further boarding but still do no know the result.  Believe will be returning to Maadi later this week.  Continued writing then pictures “Chad Hanna”.  Henry Fonda & Dot (Dorothy) Lamour.

Join 1,759 other subscribers
An insta filter is the closest I am going to get to a winged eyeliner look.
You know you live in Australia when this is the sign at the train station
Lovely bronze kangaroo - pity about the nipples… and the terrible photo
Spectacular view from the Blue Mountains - I would share more photos but they all look the same.
Very excited to see this show.
There are no words to describe how much I ❤️ my new Electra E-bike.
“Work from anywhere” has its perks. Breakfast from @guzmanygomez this morning alongside the #brisbane river near #southbankparklands
Went for a run before work yesterday morning. Came home with a 10 person tent which a neighbour left outside with a “free” sign. That was a long .5km carrying that sucker home. Delighted it is complete and in pretty good condition. So that sorts out accommodation next time my nephews are here.